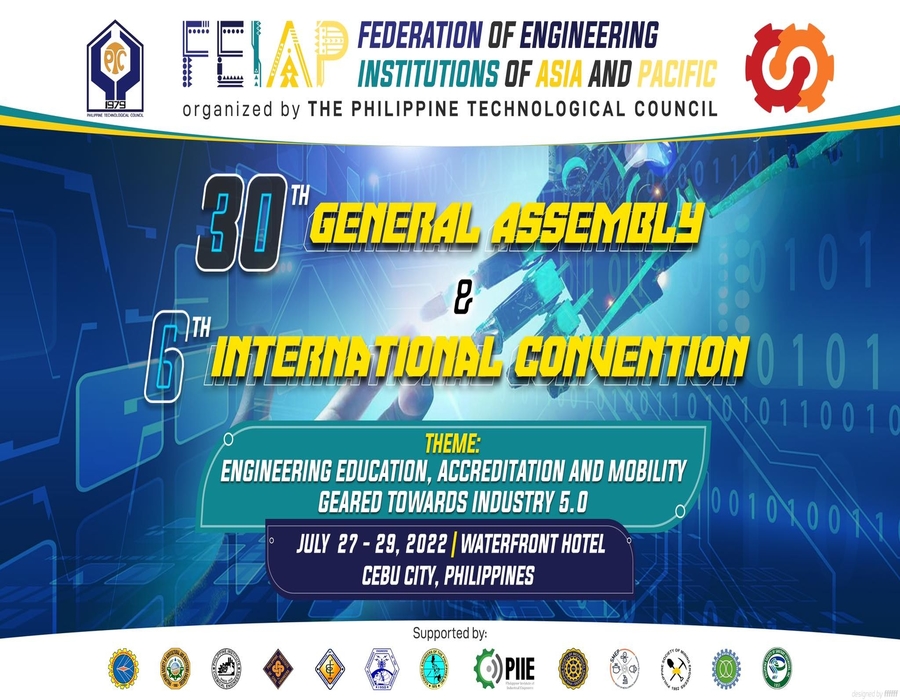 The Federation of Engineering Institutions of Asia and the Pacific (FEIAP) is an international non-profit professional organization that was founded as The Federation of Engineering Institutions of Southeast Asia and the Pacific (FEISEAP) on 06 July 1978. The establishment of FEISEAP was convened and organized by The Engineering Institute of Thailand under The King’s Patronage on 03 July 1978 in Chiang Mai, with the support of the United Nations Educational, Scientific, and Cultural Organization (UNESCO).It was in Cebu City, Philippines during FEISEAP’S 14TH General Assembly on 26 November 2007 that the question concerning the continuation of FEISEAP was discussed. This eventually led to the change in its name to FEIAP as incorporated in the Constitution that was adopted during the Special General Assembly of the Federation that was held in Hanoi, Vietnam on 02 June 2008. The Federation is an international member of the World Federation of Engineering Organizations (WFEO).Being an independent umbrella organization for the engineering institutions in the Asia and the Pacific regions, FEIAP broadened its scope to bring the member countries closer together with the following objectives:

These goals sum up to FEIAP’s core value of having a network that promotes the concept and application of sustainable socio-economic development in engineering practices, making it a premier professional organization for Asia and the Pacific.

The FEIAP General Assembly is a yearly activity that serves as a venue for lively discussions among professional engineers regarding technological advances and issues relevant to the practice and advancement of the engineering professions in and around Asia and the Pacific regions in ways that are mutually beneficial in support of the member countries’ sustainable socio-economic development objectives.

The 30th FEIAP General Assembly and the 6th International Convention will be on 27-29 July 2022 at Waterfront Hotel in Cebu City, Philippines. This will be hosted by the Philippine Technological Council which is a pioneering member of FEIAP and the Professional Accreditation body for engineering education programs in the country that was established under the FEIAP Guidelines and the Washington Accord.